The LIGO group at UBC
» Home » 2020 » June » 25 » Discovery of the heaviest neutron star, or lightest black hole, ever observed

Discovery of the heaviest neutron star, or lightest black hole, ever observed

An international team of astrophysicists, including researchers at UBC, have detected the ‘extremely loud’ merger of a black hole with a mystery compact object—the most asymmetric gravitational-wave source yet observed. 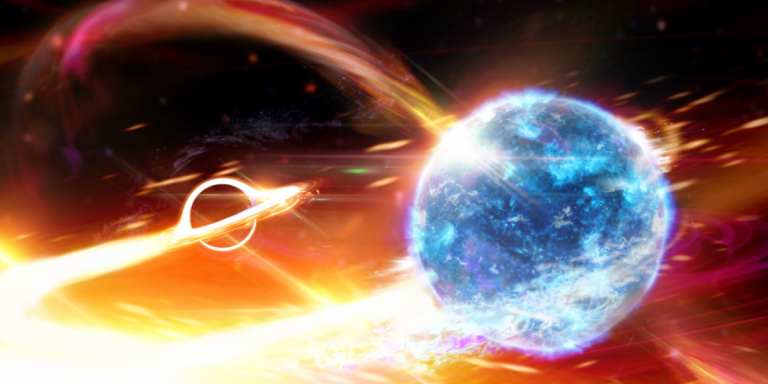 Artist’s impression of the merger of a black hole and a mystery compact object. Image credit: Carl Knox/OzGrav

GW190814, the merger of a heavy black hole with an unidentified compact object about nine times smaller, was reported today in Astrophysical Journal Letters.

When stars die, they can collapse into black holes or explode in a supernova that leaves behind dense, dead remnant star cores called neutron stars. For decades, astronomers have been puzzled by the observed gap between measured neutron star masses and black hole masses. Past observations that used light to measure black hole companions orbiting stars yielded neutrons stars with masses no more than 2.5 times our own Sun, and black holes with masses no less than five times that of our Sun. The question has remained: Could any stellar remnant could form in this ‘mass gap’?

The mass of the lighter compact object in the GW190814 system lies between 2.5 and three solar masses, placing it confidently within the ‘mass gap’. This makes it heavier than nearly every neutron star observation reported to date, or an unusually light black hole, consistent only with the remnant black hole from the binary neutron star merger observed in 2017, GW170817.

The heavier compact object in the GW190814 system had a mass of approximately 23 solar masses (23 times the mass of the Sun) and is consistent with the population of black holes observed by a network of gravitational wave detectors, including LIGO and Virgo.

The large asymmetry in masses modifies the gravitational-wave signal in such a way that enables scientists to leverage a fundamental prediction of Albert Einstein’s General relativity—that gravitational waves ‘ring’ at more than one fundamental frequency, so-called higher multipoles.

These harmonics in the gravitational wave signature allow researchers to better distinguish between the effect of the distance and the inclination of the orbit of the two objects relative to the Earth. Researchers estimate GW190814 occurred roughly 800 million lightyears away, 800 million years ago.

For some systems, astrophysicists are able to infer whether a compact object in a merger is a neutron star or a black hole by looking for a unique signature imprinted on the gravitational wave signal. For neutron stars, which are composed of extremely dense matter, the gravitational force exerted by its companion raises, similar to the ocean tides on Earth due to the Moon. However, for a system as massive and asymmetric as GW190814, the tidal imprint is too small to measure.

GW190814 is the most extreme mass-ratio merger observed so far, adding to the growing number of gravitational wave signals observed by the National Science Foundation’s Laser Interferometer Gravitational-Wave Observatory (LIGO) and the European Virgo detector. LIGO is a network of two gravitational wave detectors with four-kilometer arms located in Hanford, Washington and Livingston, Louisiana in the US. The three-kilometer Virgo detector is located in Cascina, Italy.

A broad team of researchers at UBC are advancing gravitational wave science as part of the global LIGO Scientific Collaboration. Minkyun Noh, an assistant professor in the Department of Mechanical Engineering, and his lab are pursuing designs which will support quantum light squeezing in the planned LIGO A+ upgrade.

The GW astrophysics group at UBC, led by McIver, contributes to searches for gravitational wave signals from spinning neutron stars and recovering signals like GW190814 in addition to improving and calibrating the Advanced LIGO detectors.

What are gravitational waves?

Gravitational waves are tiny ripples in the fabric of spacetime that carry information about the movements of massive objects in the Universe, like black holes.

Gravitational waves are a unique way to explore the dark, hidden Universe. Since their Nobel-prize winning discovery in 2015, researchers have used gravitational waves to begin mapping dead stars in nearby galaxies, measure the expansion of the Universe in new ways, and test Einstein’s relativity.